My crew Konstantin, Peter und Robert arrived in the afternoon of Saturday 21st, September 2019 in Palazzolo dello Stella. After buying provisions we started with a delicious fish dinner at Ai Tre Canai in Marano Lagunare.

Next morning at 9:30am with cloudy sky we left Stella Marina 3 hours ahead of high tide for Venice. Soon the rain started and we sailed with some north easterly winds to Venice Lagoon, which we entered at 5:00pm through Porto Lido. We anchored in Canale San Felice east of Treporti and enjoyed a legendary Bistecca Fiorentina on board. 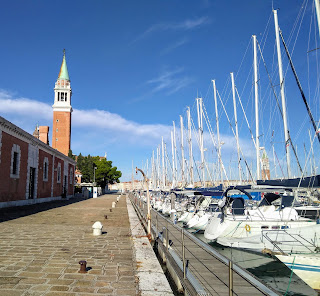 In rainy weather we motored around Burano, Murano, and San Michele next morning and finally moored at Compagnia della Vela at Isola San Giorgio Maggiore in front of Piazza San Marco. We enjoyed the city for two days and I visited the famous Biennale di Venezia. We had a very good dinner at Taverna Scalinetto in Castello across Canale di San Marco. 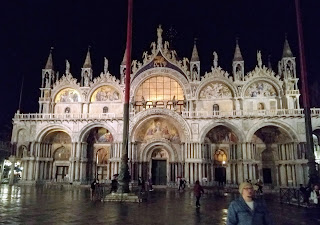 On Wednesday 25th after buying some fresh Coda di Rospo and some vegetables at Rialto Mercato and tasting the best Tramezzini at Bar Toletta we continued south to Isola Poveglia, where we anchored and spent the afternoon cooking our nice fish dinner. Next morning before dawn we left Venice Lagoon through Porto Malamocco and sailed east to Slovenia with nice northerly winds. At 5:00pm we anchored in Uvala Strunjan, took a nice swim and had Gnocchi al Gorgonzola for dinner. 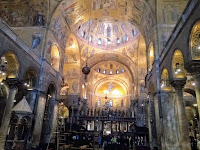 After some swimming we motored into Izola harbor to bunker diesel at noon. With no wind we motored north to Grado and moored in the city harbor. After taking a long walk around Grado we had a remarkeable dinner at Trattoria de Toni.

Next morning starting at 7:30am with overcast sky and some drizzle we motored along Litoranea Veneta inside Laguna di Marano through Canale di San Pietro d'Orio, Canale Taglio Nuovo (with minimum depth of 1.3m 2 hours ahead of high tide), Canale Anfora Vecchia, Canale Muro, Canale San Pietro (with minimum depth of 1.4m 1 hour ahead of high tide), Canale Zellina, Alaciante San Andrea, Canale di Marano, Canale de'lustri, and finally Canale Cialisia to Fiume Stella. We moored in Stella Marina at 11:30am and celebrated our rainy cruise with an excellent dinner at Ristorante Da Boschet.

We sailed 167sm in 30h during 7 days.
You may download our track in gpx-format or view it directly on GoogleMaps.
Posted by Rupert Nagler at Monday, September 30, 2019 1 comment: 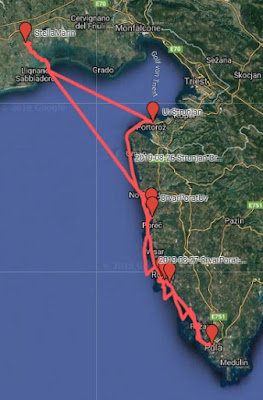 At noon on Sunday 25th August 2019 with high tide I left Stella Marina with my experienced women crew: Eva, Evi and Ilse for Uvala Strunjan in Slovenia. After anchoring we took only a short swim because of many jellyfish and prepared a nice Bistecca Fiorentina.


After motoring south next morning we declared entry to Croatia in Novigrad, walked around the city and bought some provisions. We sailed further south east into Cervar Porat, where we anchored west of the small harbor and encountered a lot of jellyfish again. Our on-board dinner was nice Pasta Pomodoro and a good bottle of red wine. 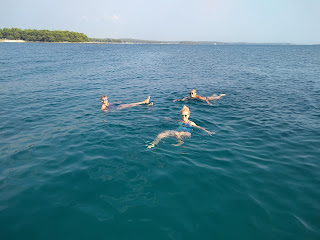 Next morning we motored with no wind south to Rovinj, where we bunkered diesel and bought some nice Branzinos. We continued round Rt. Kurent and anchored in cristall clear waters in Uvala Polaris with no jellyfish and best swimming conditions. So we spent 2 days at anchor in nice weather. At evening we cooked our Branzinos in the oven with some potatoes and vegetables. 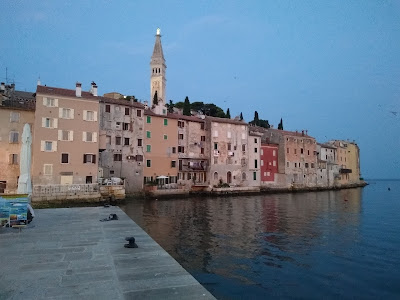 On Thursday 29th we sailed south to Pula and moored in the ACI marina. We strolled around the city and visited market and fortress. A typical Croatian Dinner we had at Pizzeria Jupiter, Next day at noon with nice westerly winds we tacked back to Rovinj, where we moored in the new ACI Marina and had a sumptuous fish dinner at Bar Rio. 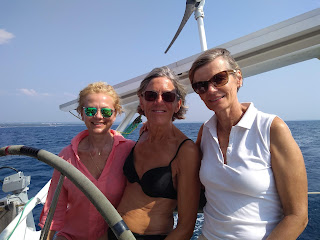 Before dawn Eva left us by catamaran from VeneziaLines to meet her husband in Venice.
The rest of the crew and I sailed again with nice westerly winds to Uvala Sv. Martin, where we anchored, took a swim with no jellyfish and cooked some mackerel with rice.

Weather forecast promised bad weather for the next days, so we decided to return back to Italy. After crossing northern Adriatic we reached Stella Marina with high tide at noon of September 1st. When the rain started we had already finished our dinner in Marano Lagunare at Trattoria Barkaneta

We sailed 165sm in 33h during 9 days.
You may download our track in gpx-format or view it directly on GoogleMaps.
Posted by Rupert Nagler at Tuesday, September 03, 2019 No comments:

Culture Cruise to Ravenna and Venice 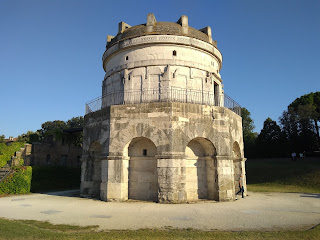 After buying some provisions we left our harbor Marina Stella on Saturday 17th, August 2019 at noon with high tide and entered Porto Buso at 2:00 pm, where we anchored at Isola Anfora near the canal. We enjoyed a sumptuous lagoon lunch at Ai Ciodi and left Porto Buso again motoring south with no wind for Ravenna at 6pm. 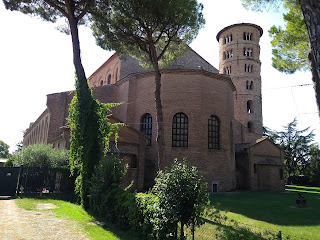 My crew Elisabeth, Andreas, Linus and Flora experienced a quiet night cruise and changed watch every 3 hours until we moored in Marina Ravenna 9:00 am next morning. We stayed in Ravenna for 2 nights and visited intensely all the famous sights. A remarkable dinner we had at Mateo. 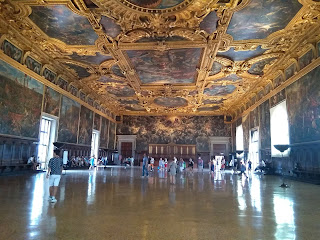 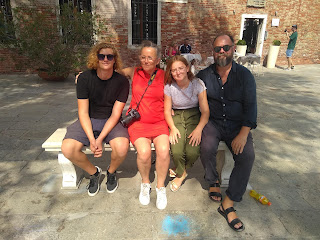 Tuesday 20th early in the morning we left Ravenna and sailed to Venice with slight southerly winds. We entered Laguna di Venezia through Porto Malamocco and anchored west of Isola Poveglia, where we cooked a wonderful Bistecca Fiorentina and spent a quiet night.


Next morning we motored north through Canale di Santo Spirito, Canale Fasiol and Canale della Giudecca to Isola San Giorgio Maggiore, where we moored in the small marina Compagnia della Vela assisted by a nice marinero. For two days we visited many cultural sites in Venice. 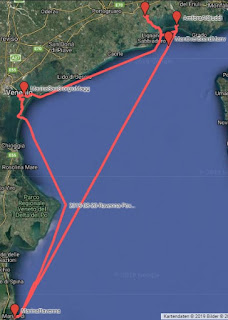 Before dawn on Friday 23th we left Venice through Porto Lido and motored against gusty north easterly winds to Lignano. We reached Marina Stella after high tide at 4pm and celebrated our short culture cruise with a good dinner at Restaurant 900 All’Isola.

We sailed 220sm in 44h during 7 days.
You may download our track in gpx-format or view it directly on GoogleMaps.
Posted by Rupert Nagler at Monday, August 26, 2019 No comments:

Croatian Summer Sailing with some Thunder 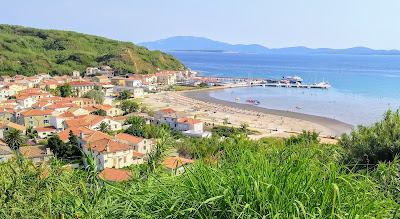 After some relaxing days in Marina Stella my wife Ilse and I set sail south to Novigrad on Saturday, July 20th 2019. We anchored in Luka Cervar Porat with tomato and tuna salad for dinner. Next morning we tacked against a nice southerly wind to Otok Susak, where we moored alongside the new harbor pier at sunset and had dinner at Hotel Sansegus. In the morning we walked the sandy hills up to the lighthouse, visited the nice village and took a long bath along the sandy beach.
At noon we sailed south to Otok Skarda, where we took a buoy in cristal clear Uvala Griparica. 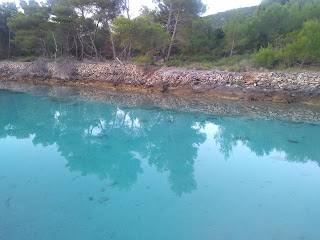 Next day we motored with southerly winds south to Otok Molat, where we anchored in beautiful Uvala Jazi, spent the afternoon swimming and cooked Spaghetti Carbonara for dinner. Next day after some 20 miles southward we took a buoy in Uvala Vodenjak in the south of Otok Iz, where we savoured  on board a nice meat grill delivered to us by boat by a nice girl from a near konoba. 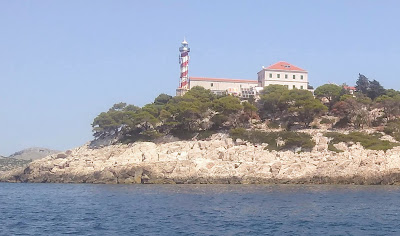 On Thursday, 25th July we sailed into the Kornati archipelago, passed shallow Vela Provesa, rounded Sestrice lighthouse and finally moored at Konoba Levrnaka, where we met our friends Vera and Michael with their children and grandchildren, and enjoyed a nice fish dinner together. 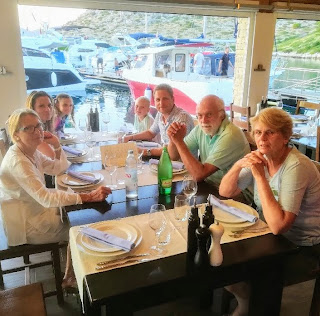 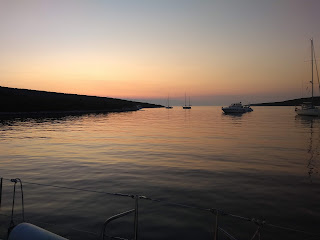 After the usual morning walk around Otok Levrnaka and a good swim we motored through Mali Provesa back to Otok Iz where we moored in Marina Veli Iz in the harbor for the next three nights because of ferocious weather forecasts. Between showers and thunderstorms we took some walks and enjoyed the nice restaurants Lanterna and Luzarija.
On Monday 29th we bought some bread, vegetables, ham and cheese at the advisable Pekarna and sailed northwest to Prolaz Zapuntel between Ist and Molat, where we took a buoy in Uvala Mljake, enjoyed the clear turquoise waters and had Fusili con Funghi for dinner on board. Next morning we tacked against some northerly winds to Uvala Tomozina west of Otok Losinj, where we anchored for the night and had Kranjska Klobasa with Kupus Salatu for dinner.

Early next morning we crossed Kvarner Gulf with weak northerly winds, passed Porer Lighthouse, sailed through Fazana Kanal to Uvala Polaris, where we spent the night at anchor. At noon we sailed to Rovinj to bunker diesel and then motored through Limski Canal. Finally we anchored in Uvala Fabjan north of Vrsar and enjoyed Spaghetti Pomodoro and a quiet night on board. 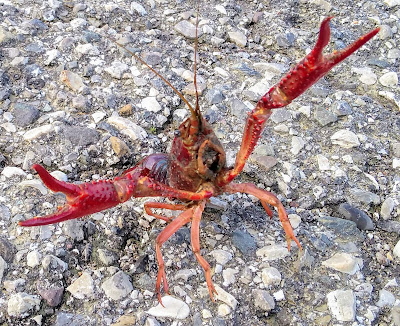 On Friday 2nd of August we left Vrsar in rainy weather. In the afternoon we anchored in Luka Cervar Porat east of the mussel farm in 7m depth with 40m chain (surrounded by depth of 12m). Because we had contradictory weather forecasts between some rain and heavy thunderstorms, winds from northeast or southwest, from cosy 20 knots up to heavy 50 knots we checked the anchor again and mounted our chain claw to damp jerks and 6m more chain to work as a riding weight.
In the evening strange black clouds appeared and the wind got very strong onshore from northwest. Suddenly the anchor alarm sounded. My wife yelled that we are getting to near to shore. In the last second we started the motor and went into the gale-force wind. I jumped to the anchor and found the rope of the chain claw broken. I was able to raise the anchor while my wife motored against the storm and then to a more sheltered place, where I dropped the anchor again. We spent the rest of the stormy night happy about our narrow escape. Next morning we got a lot of news  about boats beeing lost in northern Croatia due to heavy thunderstorms. 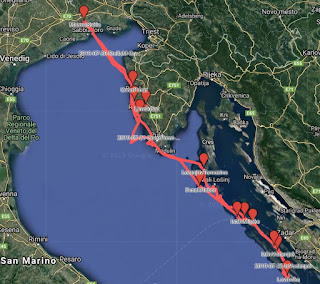 We discussed what we could have done better and found that:

Early in the morning with slight sea and no wind we motored to Novigrad, where we declared exit and sailed with a nice norteasterly wind via Lignano to Marina Stella, where we moored with high tide early afternoon. We celebrated our lucky cruise with a exceptional dinner at Da Boschet.

We sailed 380sm in 74h during 14 days.
You may download our track in gpx-format or view it directly on GoogleMaps.
Posted by Rupert Nagler at Monday, August 05, 2019 No comments:

This blog tells you about the cruises of S/Y Sea of Joy from 2009 on.

You can read about the boat at http://soj.idi.co.at/